Hello! I’m Dana Wanzer and this week we’re discussing Twitter! You can find me on Twitter at @danawanzer.

Together with Libby Smith, Deven Wisner, John Burrett, Jenny McCullough Cosgrove, and Echo Rivera, we’re going to show the benefits of joining Twitter for evaluators and the field of evaluation. You may know of EvalTalk, the LinkedIn group, and many of the AEA TIGs have Facebook groups. But did you know there is a rich and vibrant community of evaluators who talk daily via Twitter?

Hot Tip: Participating in Twitter as an evaluator is great for professional development! Evaluators from around the world share evaluation reports, tips and tricks, and lessons learned. This has helped me stay up to date with the latest news and newest techniques that I can apply to my practices. You can stay connected in the conversation by following the hashtags #eval and #evaluation.

Cool Trick: The networking that happens on Twitter is amazing. Carolyn Camman and Elizabeth Grim have both gotten jobs through their connections on Twitter. Elizabeth followed a notable evaluator on Twitter for months, retweeting and favoriting each other’s content. “Later that year, when we were both at AEA, they sent me a Twitter message asking to meet with me. After those interactions, we ended up collaborating on a panel presentation and I was asked to do some independent consulting work. Without Twitter, I’m not sure we would have ever connected.”

Sheila Robinson even collaborated with Kim Firth Leonard for two years before meeting in person for the first time at the 2015 AEA Conference to present a skill building workshop on survey design! 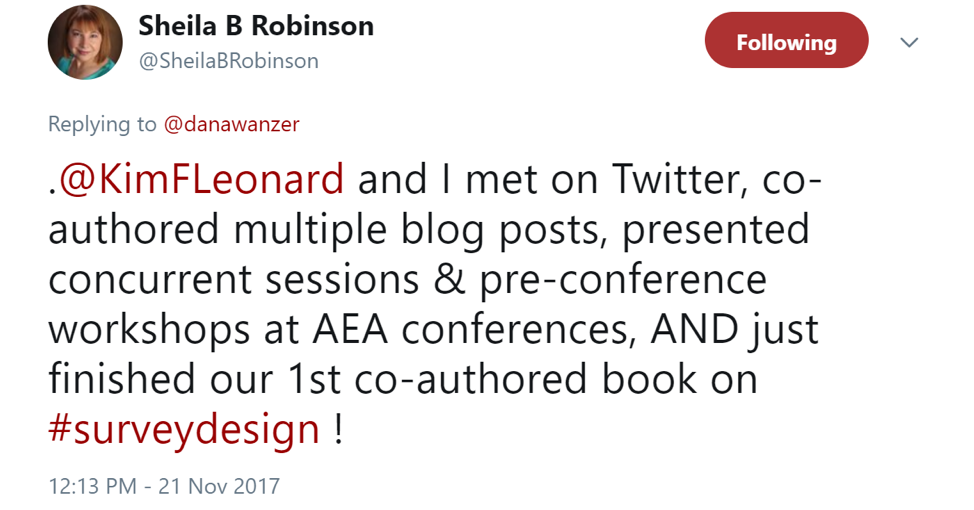 Lesson Learned: The evaluation community on Twitter is like no other. It extends the conversations past our yearly conferences, but it also opens doors for networking. Deven Wisner stated that because of Twitter, “for #eval17, it made connecting in-person SO much easier. Conversations were a lot more free flowing because the relationship was established before I even arrived at the conference.”

Rad Resources: Various evaluators have written blog posts about how to get started on Twitter and other benefits they’ve experienced.

Stay tuned for upcoming AEA365 posts on using Twitter for networking and at conferences, as an evaluation methodology, for AEA local affiliates, and how to participate in our very first #evalTwitter chat!

The American Evaluation Association is celebrating #EvalTwitter week. All posts this week are contributed by evaluators engaging, networking, and collaborating through Twitter. Do you have questions, concerns, kudos, or content to extend this aea365 contribution? Please add them in the comments section for this post on the aea365 webpage so that we may enrich our community of practice. Would you like to submit an aea365 Tip? Please send a note of interest to aea365@eval.org . aea365 is sponsored by the American Evaluation Association and provides a Tip-a-Day by and for evaluators.