I am Michael Quinn Patton of Utilization-Focused Evaluation. Engaging intended users I have to be thoughtful about words, attempting to avoid jargon and words that make people cringe. What those words are can change –and surprise.  Take, for instance, the notion of competency.

In working on Blue Marble (global) Evaluation, I adapted the global competencies framework of Columbia Teachers College. Blue Marble evaluators (thinking globally, evaluating globally) should be globally competent.  All was going well until I checked back with colleagues involved with the original AEA cultural competence statement, who were doing some rethinking. 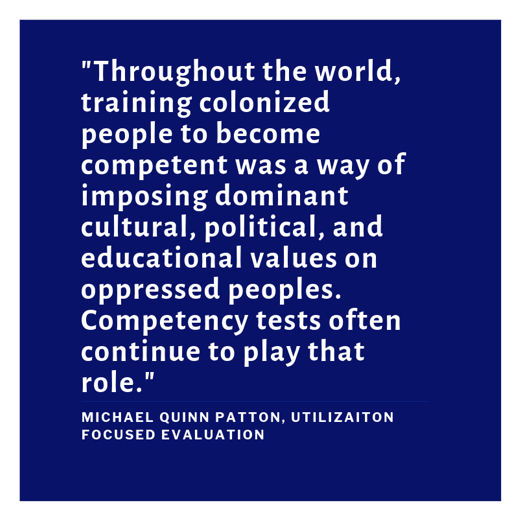 The concept of competence comes with deep cultural, imperialist, colonial, and oppressive history. Competency tests have historically been a way of excluding rather than including. Competency tests were administered to Blacks in the South by white electoral judges who decided whether they were competent to vote. Residential schools that took indigenous children from their communities and cut them off from their families, culture, and language proclaimed that they wanted them to become “competent” to succeed in modern society. Throughout the world, training colonized people to become competent was a way of imposing dominant cultural, political, and educational values on oppressed peoples. Competency tests often continue to play that role.

Another concern: competency can constitute a fairly low bar as an entry-level, minimum standards construct. I don’t want a doctor or lawyer who is just competent. Or an evaluator who is just competent. We want people to demonstrate excellence. Criterion of excellence, mutually agreed to, with diverse and contextually appropriate engagement, may be more meaningful and useful than minimum competency standards.

Finally, competency connotes a binary state: competent/incompetent. The concept is static. Get licensed, certified, you are competent. A dynamic view would emphasize ongoing learning and development, not a fixed state of competency.

So, in the end, we are being more circumspect and sensitive about the notion of global competency, the meaning of competency in different contexts for different stakeholders, and placing greater emphasis on having Blue Marble evaluators aspire to being World Savvy, a commitment to ongoing learning about and engagement with global issues, connecting the global to the local, and connecting social justice with environmental justice.

5 thoughts on “A Look at Language Week: Beyond Competency by Michael Quinn Patton”