Greetings. This is Jean King, an Evaluation Studies professor at the University of Minnesota for another three months. My life-long goal as an evaluator has been to leave this messy world of ours a better place as a result of my work, even knowing that the measurement of that outcome is highly challenging. Some call this long-term impact social betterment:

I applaud the definition of social betterment for referencing “the context of a democratic society.” I fear that we sometimes forget that evaluation cannot thrive in an authoritarian state where deliberation and public opinion are neither possible nor considered. 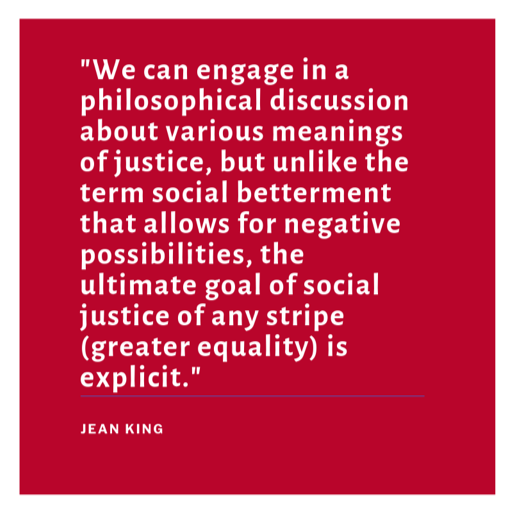 For evaluators, social betterment appears to fall into a broadly positive category that also includes motherhood and apple pie. Why would anyone oppose making society better? Think of the motivating possibilities: livable wages, affordable mental health programs, adequate housing, equitable treatment for all peoples, justice applied fairly, and so on. Many social programs work to create such outcomes.

But there’s a catch. Knowing that I am purposely choosing provocative examples, here’s a different list for the “improvement of social conditions.” Within our purportedly democratic society, some support banning Muslims from entering the country or trans soldiers from serving in the military. Others favor eliminating access to affordable health care or preventing immigrants from seeking asylum. An extreme example concerns Nazi Germany. Hitler, initially elected democratically, ultimately developed the so-called final solution of gassing Jews, the Roma people, individuals with disabilities, and political dissidents. Those who actively supported the Third Reich presumably considered this social betterment. The point is that even in democratic settings, negative examples of betterment that might be supported through deliberation and public opinion come easily to mind. If enacted, each of these examples would “improve” social conditions for those who hold certain values. But would we call these examples of social betterment?

To my mind, it is better to name our underlying value commitment for what I believe it really is: social justice, including racial and economic justice. That term, of course, is also problematic because it is a broad label that overarches a variety of movements that seek greater equality. We can engage in a philosophical discussion about various meanings of justice, but unlike the term social betterment that allows for negative possibilities, the ultimate goal of social justice of any stripe (greater equality) is explicit. My personal preference is a Rawlsian framing that focuses attention on the least privileged in society (Rawls, 1971/1999) and one that builds on current grassroots efforts that are evident around the world.