I’m Susan Kistler, the American Evaluation Association’s Executive Director, and I post each Saturday to aea365. On January 1, 2010, we started aea365 with three subscribers – myself, John LaVelle our intrepid intern responsible for overseeing aea365 startup, and a relative who shall remain unnamed but wanted to support our efforts.

In the first few months, John worked diligently on two fronts. First, he encouraged authors to contribute to aea365, knowing that the readership was low and the forum untested. I strongly encourage you to check out the aea365 archive to read some of the earliest contributions (as well as over 700 others). Second, he worked with a number of people to reach out to AEA members and nonmembers alike to encourage people to subscribe – to receive a tip-a-day right in their email boxes. And subscribe you did. Approximately a year ago, in January of 2011, I reported that by December of 2010, 1,560 people viewed aea365 via email or RSS each day. The rise in subscriptions has continued steadily in our second year. 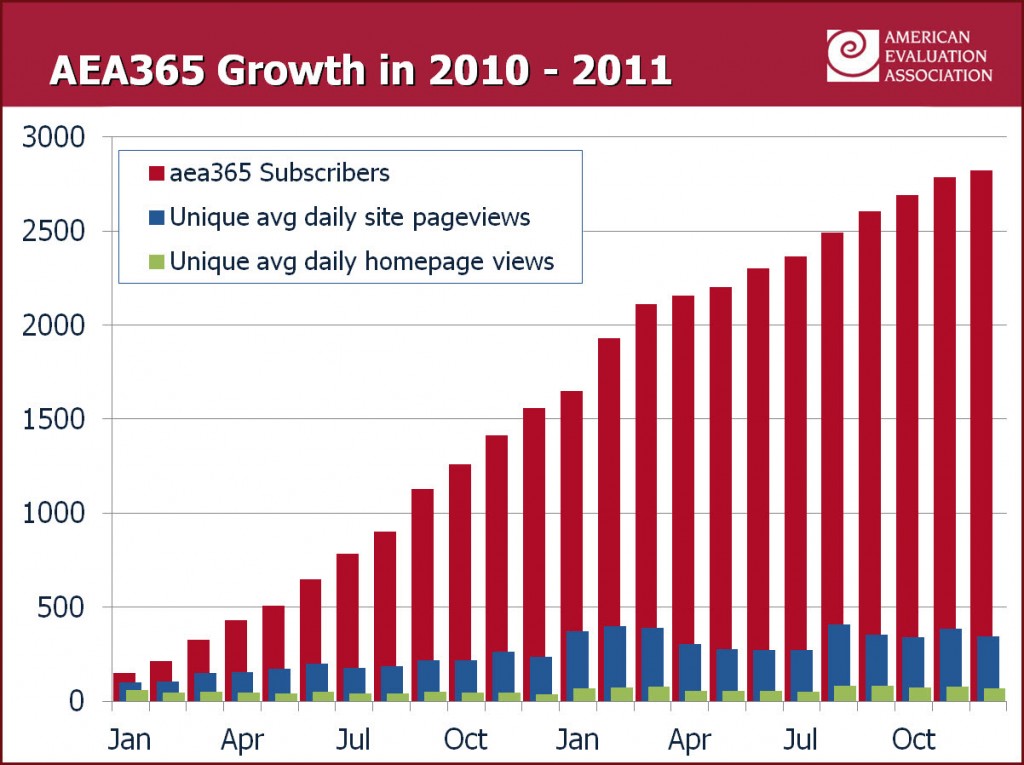 Lesson Learned: We use Feedburner to track subscribership. This May 2010 post will tell you more about it if you haven’t heard of Feedburner. The chart above shows our subscribership growth from aea365’s start in January of 2010 through to the end of 2011 when we recorded 2821 aea365 subscribers on an average day.

Hot Tip: Share you [blog] data. We’re sharing here so that association colleagues may have a case example of a blog’s growth trajectory, so that our potential authors will gain an understanding of the likely size of the readership, so that we are transparent regarding aea365’s readership, and finally as an entrée to saying ‘thank you.’ Thank you to every single subscriber, for taking the time to read and learn and share (lots of posts are passed along!). And a double thank you to all of our writers, over 500 to date, who have contributed their knowledge and expertise to aea365.

Get Involved: If you are an email-based subscriber, who joined on or before December 31 of 2011, you’ll be receiving a very short survey (I promise – 5 minutes max!), asking you about how often you read aea365 and how, if at all, you have used aea365 content. For one example, stay tuned for Monday’s post from Sheila Robinson Kohn and Kankana Mukhopadhyay talking about how they have used aea365 as a teaching tool.

And, if you have an example that you would like to share with the world, consider posting it in the comments or sending me a note at susan@eval.org regarding possibly submitting it as an aea365 contribution.