I’m Marc Smith, Chief Social Scientist at Connected Action, co-founder of the Social Media Research Foundation, and one of the team behind NodeXL I’ve been excited to see posts on aea365 from users of NodeXL such as Johanna Morariu, and Shelly Engleman and Tom McKlin.

Rad Resource – The Social Media Research Foundation: A new organization, the Social Media Research Foundation, has been formed to develop open tools and open data sets, and to foster open scholarship related to social media. The Foundation’s current focus is on creating and publishing tools that enable social media network analysis and visualization from widely used services like email, Twitter, Facebook, flickr, YouTube and the WWW.

Rad Resource – NodeXL: The SMR Foundation has released the free and open NodeXL project, a spreadsheet add-in that supports “network overview discovery and exploration”. The tool fits inside your existing copy of Excel in Office 2007 or 2010 and makes creating a social network map similar to the process of making a pie chart. Researchers applying NodeXL to a range of social media networks have already revealed the variations present in online social spaces. A review of the tool and images of Twitter, flickr, YouTube, and email networks can be seen on the site.

Using NodeXL, users can easily make a map of public social media conversations around topics that matter to them. Maps of the connections among people who recently said the name of a program, organization, or event can reveal people who occupy key positions as well as clusters in the crowd. Some people who talk about a topic are more in the “center” of the graph, they may be influential members of the population. NodeXL makes it a simple task to sort people in a population by their network location.  NodeXL supports exploration of social media with import features for personal email, Twitter, Flickr, YouTube, Facebook and WWW hyper-links.

As an example, I built on Johanna’s post focusing on twitter users of the hashtag #eval. Here is a network map, built directly in NodeXL, with vertices sized by the number of followers. 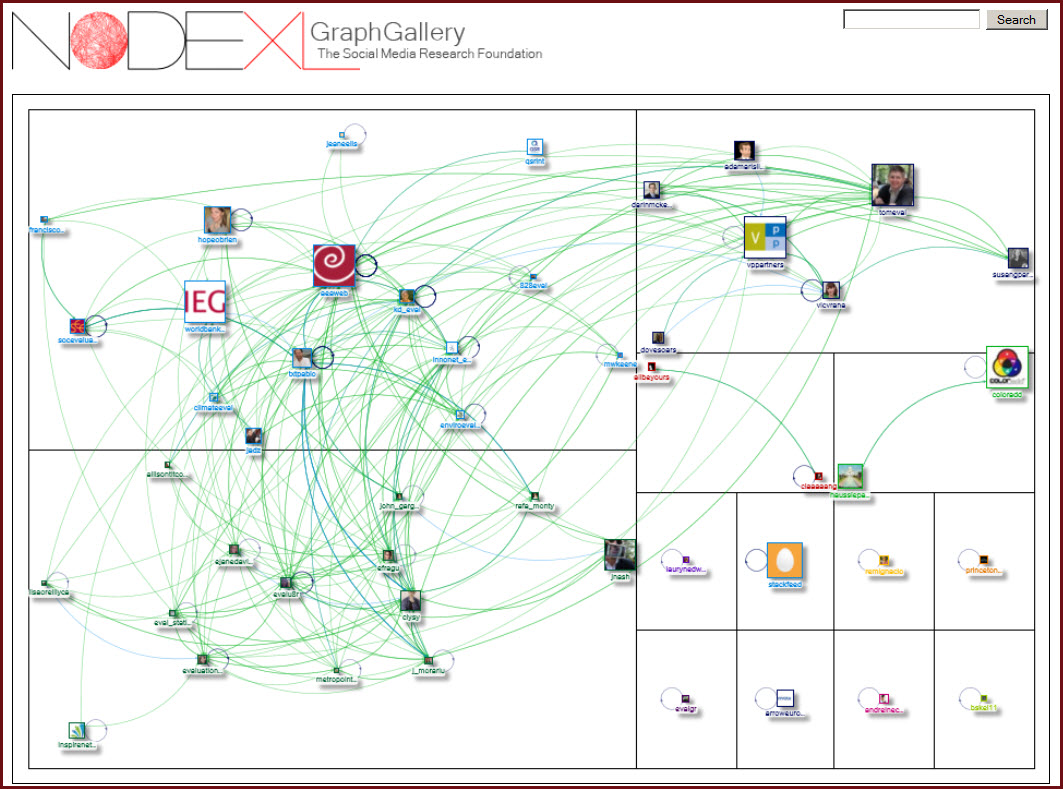 Rad Resource – Analyzing Social Media Networks with NodeXL: Insights from a connected world. My co-authored book provides an introduction to the history and core concepts of social network analysis along with a series of step-by-step instructions that illustrate the use of key features of NodeXL. The second half of the books is dedicated to chapters by a number of leading social media researchers that each focus on a single social media service and the networks it contains. Chapters on Twitter, email, YouTube, flickr, Facebook, Wikis, and the World Wide Web illustrate the network data structures that are common to all social media services.

Do you have questions, concerns, kudos, or content to extend this aea365 contribution? Please add them in the comments section for this post on the aea365 webpage so that we may enrich our community of practice. Would you like to submit an aea365 Tip? Please send a note of interest to aea365@eval.org . aea365 is sponsored by the American Evaluation Association and provides a Tip-a-Day by and for evaluators.