Hi, my name is Christopher Moore.  I am a doctoral student in Quantitative Methods in Education at the University of Minnesota and a Quantitative Analyst at the Minnesota Department of Education.  My interests include preventing educational and health disparities, latent variable models, spatial statistical methods, and causal theory and inference.

Hot Tip: So you’re conducting a theory-driven program evaluation?  You’ve developed a solid logic model, you’ve collected relevant quantitative data, and now you’re interested in estimating the degree to which the program has been effective?  Structural equation modeling is a statistical approach that is well-suited for estimating relationships specified by a logic model.

As described by Paul Mattessich in The Manager’s Guide to Program Evaluation, logic models feature program elements and paths from causal elements to outcomes.  Elements in the middle represent both causes and outcomes, mediating the influence of inputs on longer-term outcomes.  Theory-driven evaluators like to pull mediators out of the “black box.”

Figure 1. Elements of a logic model

In the analysis phase of a theory-driven evaluation, structural equation modeling can simultaneously operationalize elements as latent factors and estimate multiple causal paths.  It does so by modeling the observed covariance matrix.  If the data contain dichotomous or ordinal dependent variables, then a polychoric correlation matrix should be modeled.  A sequential strategy (e.g., scaling followed by regression analysis for each dependent variable) requires more steps and can underestimate causal paths by not accounting for measurement error.

A logic model can be adapted into a structural equation model path diagram (see Figure 2).  Observed variables are represented by rectangles, and latent variables are represented by ellipses.  For simplicity, the example below features no error terms and only one input, activity, output, and outcome.  The outcomes are treated as latent variables reflected by repeatedly observed indicators (e.g., survey questions).  The intercept and slope capture initial status and change over time, respectively. 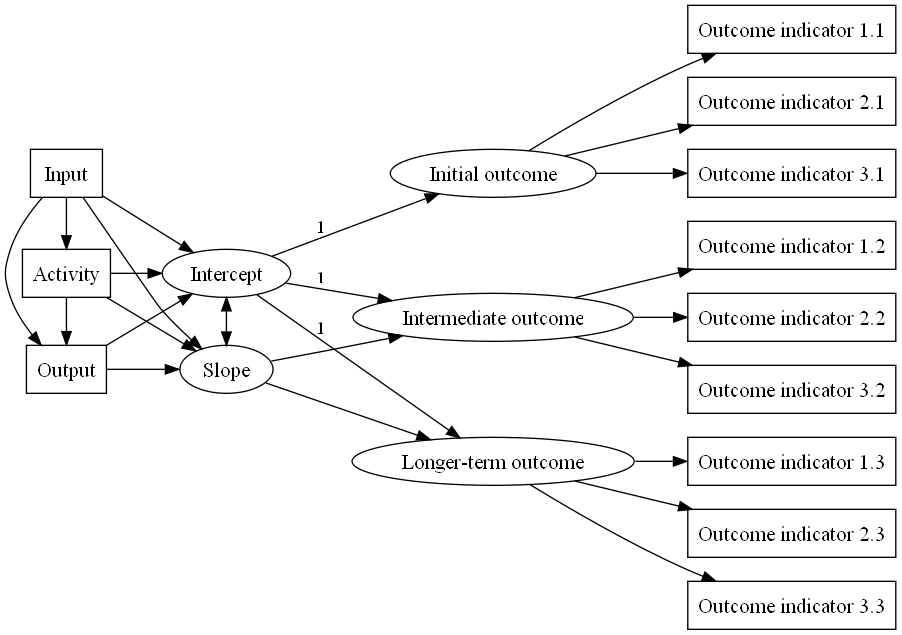 Moving to a real-world scenario in which structural equation modeling could be applied, Kathryn Tout and colleagues at Child Trends have identified a need for theory-driven evaluations of child care Quality Rating Systems (QRS).  QRS represent a relatively new approach to helping parents choose high quality child care, which is believed to promote child development.  Using Tout and colleagues’ article as a guide, I developed a path diagram that could be estimated with data being collected by QRS evaluators.  The actual path diagram would have more inputs, outputs, and item scores. 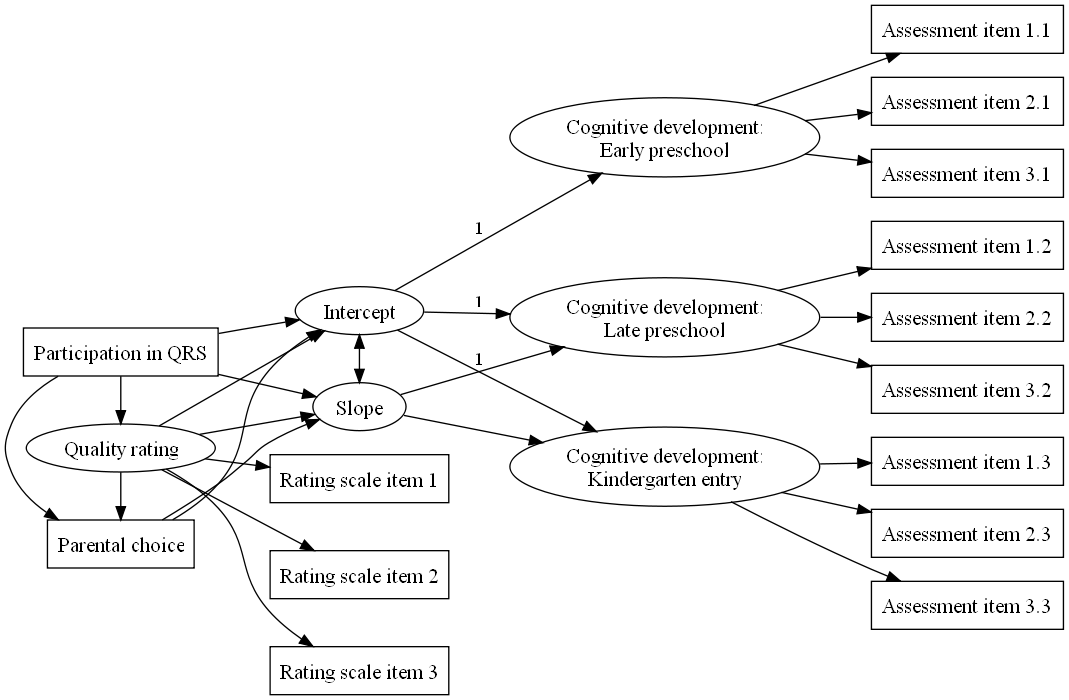 Structural equation modeling requires familiarity with matrix algebra and formal training in latent variable models and related software.  Melanie Wall, David Garson, and Alan Reifman have created helpful course web pages.  Amos is a popular add-on to SPSS that can specify structural equation models by drawing path diagrams.  Mplus is another popular program and my favorite because it can handle multilevel, categorical data sampled in a complex manner (i.e., with unequal probabilities of selection), although it does not produce path diagrams.  The sem package in R is free and another favorite of mine.  When using Mplus or the sem package, Graphviz can be used to create path diagrams, as I did above.

I hope this “tip” has encouraged you to at least consider structural equation modeling during the data collection and analysis phases of a theory-driven evaluation.  Even though evaluators skillfully develop theories of change that recognize multiple causes and outcomes inside the “black box,” a search of evaluation publications suggests that structural equation modeling could be utilized more fully.

This contribution is from the aea365 Daily Tips blog, by and for evaluators, from the American Evaluation Association. Please consider contributing – send a note of interest to aea365@eval.org.