Vidhya Shanker from Rainbow Research here. Inspired by Marie Kondo, who advises keeping only what touches our hearts, I offer evaluation two words to discard.

Diversity: Descended from business, “diversity” was introduced in evaluation in the late 1980s by AEA president Ross Conner. Conner explicitly expressed concern regarding the representation of women—where he felt AEA had made progress—and people of color, where he felt AEA had not. The last AEA president to have expressed such concern was Bob Covert. Covert’s language bore undercurrents of affirmative action: To what extent was AEA fostering professional advancement among excluded groups?

“Diversity” likely took off because—regardless of intention—it masks the formal and informal exclusion that make redress necessary. After all, everyone is diverse—an inherently relational term—in the sense of different from each other. “Diversity” allows us to forget the history underlying evaluation’s relative homogeneity. It implies a random assortment of essentialized identities—lateral as opposed to hierarchical difference. “Diverse” soon became code for different from an unstated standard of whiteness: “Racially diverse students” implies brown students, not a mixed group of students whose racial categories differ from one another’s. This usage reflects and reinforces the normativity of whiteness.

Culture: “Culture” entered evaluation discourse in the mid-80s, with Michael Quinn Patton’s call for submissions to an NDE issue on culture in evaluation.

Evaluation’s current emphasis on culture, like “diversity,” masks structural power dynamics. Phrases like “cultural competence,” like the use of “diverse” to refer to marginalized groups, are predicated on—but do not question—institutional norms of whiteness, middle-class status, heterosexuality, and “abled” bodies. Terms like “cross-cultural” and “intercultural” suggest an interpersonal, lateral relationship—as if it is equally likely for members of various groups to be evaluating programs involving each other.

In fact, however, within the USA and worldwide, the evaluation industry is dominated by those categorized as white/ of European ancestry, residing in European and European settler-colonized countries, funded by European and European-settler wealth and governments, using ways of knowing rooted in the European Enlightenment—which the papacy explicitly tied to the Doctrine of Discovery and subsequent dispossession and displacement of nearly all those outside Europe. In contrast, the overwhelming majority of those participating in evaluated programs are not of European ancestry or residence; have not accumulated individual or governmental wealth to fund evaluation; and use systems of knowledge that colonialism, enslavement, and imperialism have all but obliterated. While culture is pivotal to indigenous sovereignty, conventional uses of “culture” reduce the differences between program evaluators and participants to worldview without naming the material relations underlying our industry. 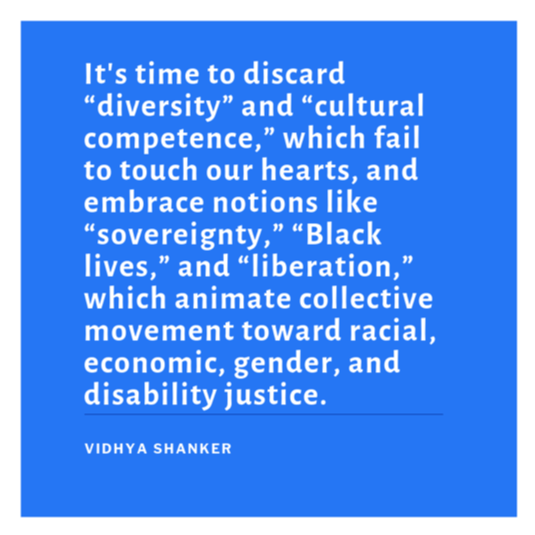 Kondo’s philosophy (Shintoism) of organization, like mine of evaluation, is rooted in spiritual practice that emphasizes energy and the right way to live. It’s time to discard “diversity” and “cultural competence,” which fail to touch our hearts, and embrace notions like “sovereignty,” “Black lives,” and “liberation,” which animate collective movement toward racial, economic, gender, and disability justice.

2 thoughts on “A Look at Language Week: Tidying Evaluation of “Diversity” & “Culture” by Vidhya Shanker”