My name is Steve Fleming, and I work for the National Center for Educational Achievement, a department of ACT, Inc. whose mission is to help people achieve education and workplace success. I also earned an M.S. in Statistics from the University of Texas at Austin.

Hot Tip: The APA style guide suggests using asterisks next to the sample estimates to indicate the p-value when space does not allow printing the p-value itself. Using increasing intensities of color as an alternative way to indicate the most significant results saves even more space. Consider: 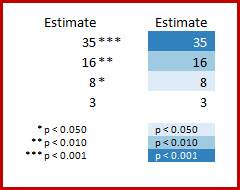 Rad Resource: How do you choose a consistent set of colors of increasing intensity? I have found Color Brewer to be a good source for this information.

What do you think? Does this vision clarify or obfuscate the meaning of statistical significance? I look forward to the discussion online.