I’m Ian David Moss, and I use logic models and theories of change to help people make more strategic decisions. Recently, some smart voices in evaluation and philanthropy have argued that logic models are outdated, as implementation in a complex world too often makes a mockery of those neat and tidy diagrams that supposedly make sense of everything.

Call me stubborn, but I’m not ready to give up on logic models. After nearly a decade of working with them, I remain convinced of their value as tools for program design, strategic clarification, defining a measurement regimen, and yes, evaluation. The (cool) trick is to make sure that logic models don’t suck. Here are some ways I’ve found to improve the odds:

Lesson Learned: Combine a logic model with a theory of change

Logic models and theories of change (here’s a primer on the difference between the two) developed from entirely separate schools of thought. Like Debra Smith and Galen Ellis, however, I’ve found that each of these tools is strengthened by the presence of the other. These days, to ensure a tight integration between the logic model and theory of change, I develop both in a single PowerPoint document. In it, the theory of change (activities, outcomes, and impacts) stands alone on the first slide, then on subsequent slides it appears grayed out with elements of the logic model (inputs, values, environmental factors, target population, assumptions, and measures) superimposed on top. 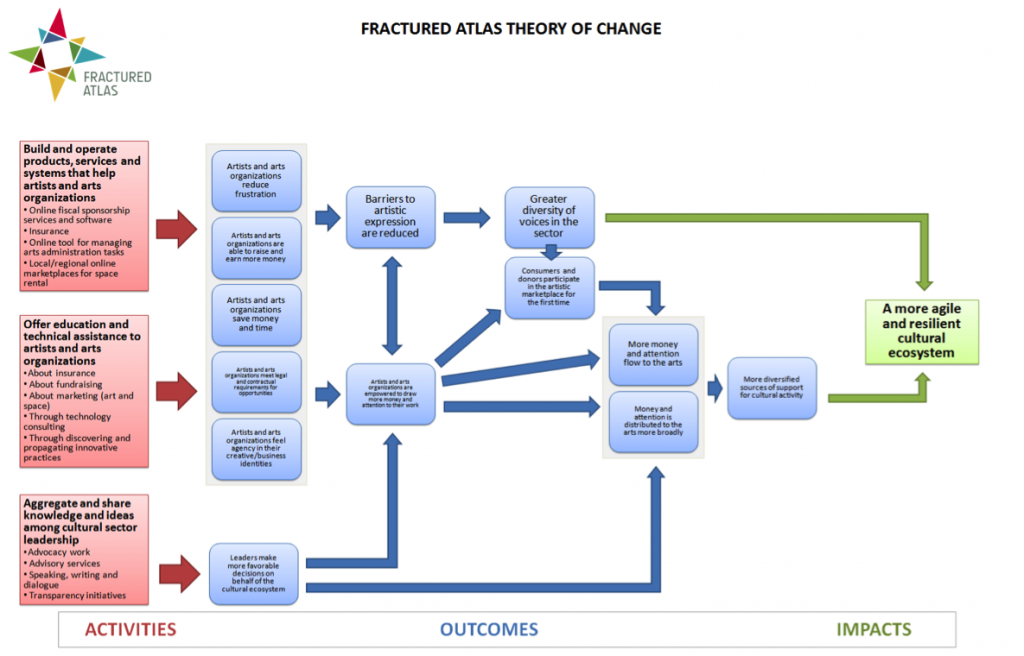 A common knock against logic models is that they are too linear. I agree – but that doesn’t mean we have to give up on them! A common situation I run into is when a program is intended to facilitate a virtuous cycle that has self-reinforcing impacts. I depict these dynamics with a “flywheel” to denote the iterative nature of the intended effects.

One client I worked with recently, the Santa Cruz Museum of Art and History (MAH), found its logic model invaluable for developing a suite of performance indicators to track on an ongoing basis, but worried that its presentation didn’t reflect the museum’s fun, accessible brand. Solution: commission a graphic artist to make an illustrated version of the theory of change. Voilà – boredom be gone!

Hot Tip: It doesn’t have to end here

There’s plenty of room to innovate beyond what I’ve described above. Wouldn’t it be awesome to have an interactive version that could zoom in or out to the appropriate level of detail? Or a way to reflect levels of confidence in the connections between different elements? Here’s my hypothesis: there’s nothing wrong with logic models that can’t be solved by better design.

The American Evaluation Association is celebrating Logic Model Week. The contributions all this week to aea365 come from evaluators who have used logic models in their practice. Do you have questions, concerns, kudos, or content to extend this aea365 contribution? Please add them in the comments section for this post on the aea365 webpage so that we may enrich our community of practice. Would you like to submit an aea365 Tip? Please send a note of interest to aea365@eval.org. aea365 is sponsored by the American Evaluation Association and provides a Tip-a-Day by and for evaluators.